Ever make plans to write an exciting review, but end up feeling too ill to even pick up your laptop? That was me two weeks ago, when this was originally supposed to go up. With no makeup look that weekend I also saw a frustrating drop in engagement on my Instagram, which is never fun to come back from. Luckily with two posts already under my belt this month, and lots of support on the last one especially, I definitely feel a lot more positive and ready to jump straight into today’s post!

I don’t think I had pre-ordered anything since school (I always had to make sure I would get the latest Sims 2 expansion pack the day it came out), but I remedied that back in April, when I caved and ordered the PLouise Base back on the 30th. I know guys, it’s just an eyeshadow primer. A primer that has been all over my YouTube and Instagram feeds, and which Nikkietutorials actually titled the “world’s best eyeshadow primer“; considering it costs just £10, it was hard to resist the urge to try it out!

Created by UK makeup artist and Instagram sensation PLouise, this base is supposed to one up the Max Select Cover Up Concealer she was using until then, promising the same colour intensity you get when you don’t set your base, but without any cracking or skipping when applying the shadow.

While there was only one shade for the initial launch, called Rumour, there are now 7 available. When I ordered, the lightest shade, 0, was out of stock; I settled for 0.5. There is no option for free shipping, which came to £4.99 for me, and in fact the cost increases as you add further items.

Shipping itself turned out to be a bit of an adventure: the release date was set for the 5th May. I got an email on the 7th to say I would get my item on the 11th; nothing showed up. I contacted DPD Local who were very helpful and strangely enough they told me they didn’t actually have my item yet. I sent an email to PLouise’s customer service, which never got a response, but I did finally receive a notification on the 16th that my parcel would arrive the next day, which it did. This would probably put me off ordering from them again unless they started selling through a reliable retailer.

Now, the fact that this base is all over Instagram speaks volumes about the quality of the product; it’s well on it’s way to being considered a cult product. So why simply review it? Instead, why not put it to the test against another cult favourite, straight from the early days of YouTube, the Urban Decay Primer Potion?

If this product isn’t considered a classic in the makeup world, I don’t know what is. It was once in everyone’s makeup kits, and I’m pretty sure it used to come free with the original Naked Palette. Nowadays, other than Stephanie Nicole on YouTube, I rarely see people mention this primer. Why not? I wanted to see for myself if the PLouise formula was all that revolutionary, or if these two ended up doing the same thing.

To start things off, here’s a table I put together with a few points about each product:

It’s pretty obvious straight away that the PLouise base is much better value for money, although you do also need to factor in the shipping costs; you could easily pick up the Primer Potion during a shopping trip and save yourself the waiting.

I’ve only ever owned minis of the Primer Potion, which come in a plastic tube just like the PLouise base, with the added bonus of adorable jeweled lids. I believe the bigger ones come with a wand, which personally I would rather pass on.

PLouise formulated her base to replace concealer, and you can tell: it’s very thick and opaque. You can even use it to prime your eyes and carve your brows all in one go!

Primer Potion straight out of the tube does look like it has a similar, thick consistency. Blended out, it almost disappears into the skin and has a transparency to it. In comparison, the PLouise base is almost like a coat of paint.

It’s recommended to apply the PLouise base with tapping motions using a brush. There are no recommendations for using the Primer Potion, so I normally use my fingers. 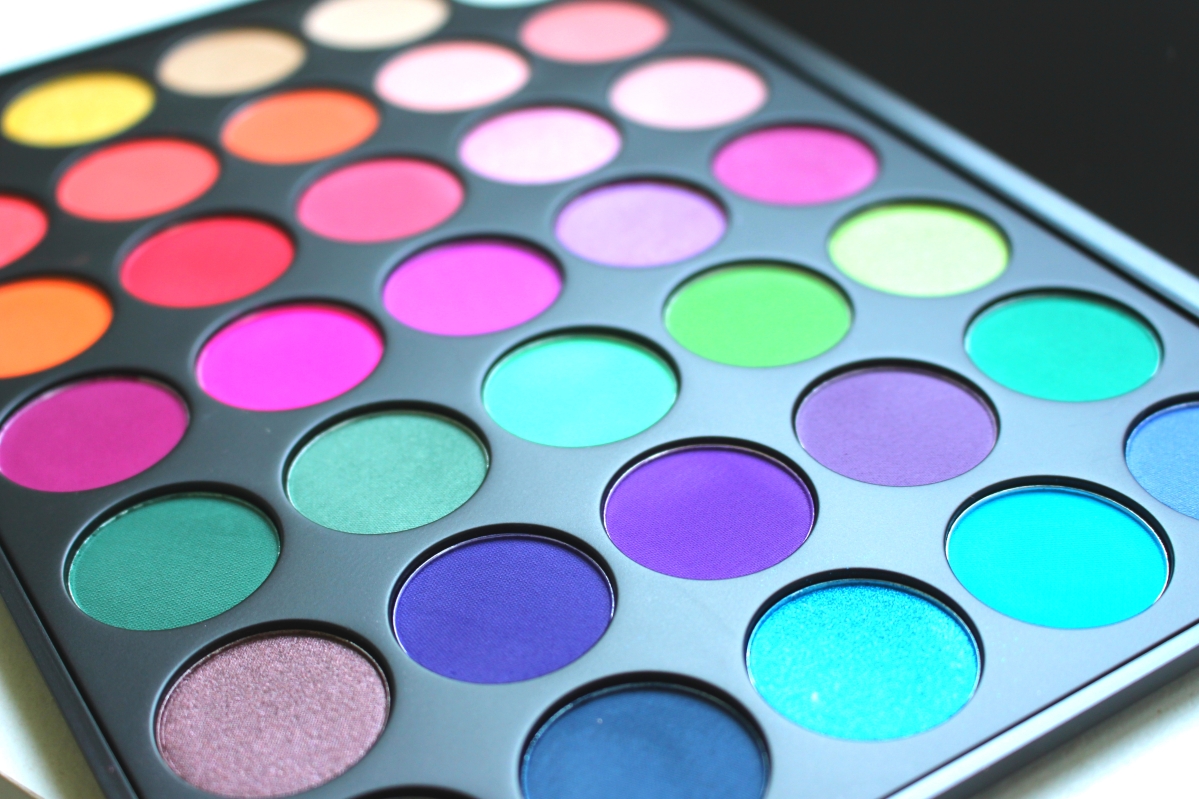 On to the fun part: the eyeshadow! This post finally gave me an excuse to try my new Morphe 35B, another Instagram favourite. PLouise is known for her very colourful, defined looks, so it only felt right to try one of my own.

I started off with my brows, then I primed each eye using a Sephora concealer brush. Already, I noticed a huge difference in opacity, with the PLouise Base easily comparable to concealer.

The first colour I went in was this lovely purply pink. Look at the blur on the PLouise side! It almost looks edited, but it’s just an indication of how smooth the application was with only a little product. The Primer Potion side took a lot of building up to get a good amount of pigmentation, and it’s still not as vibrant. 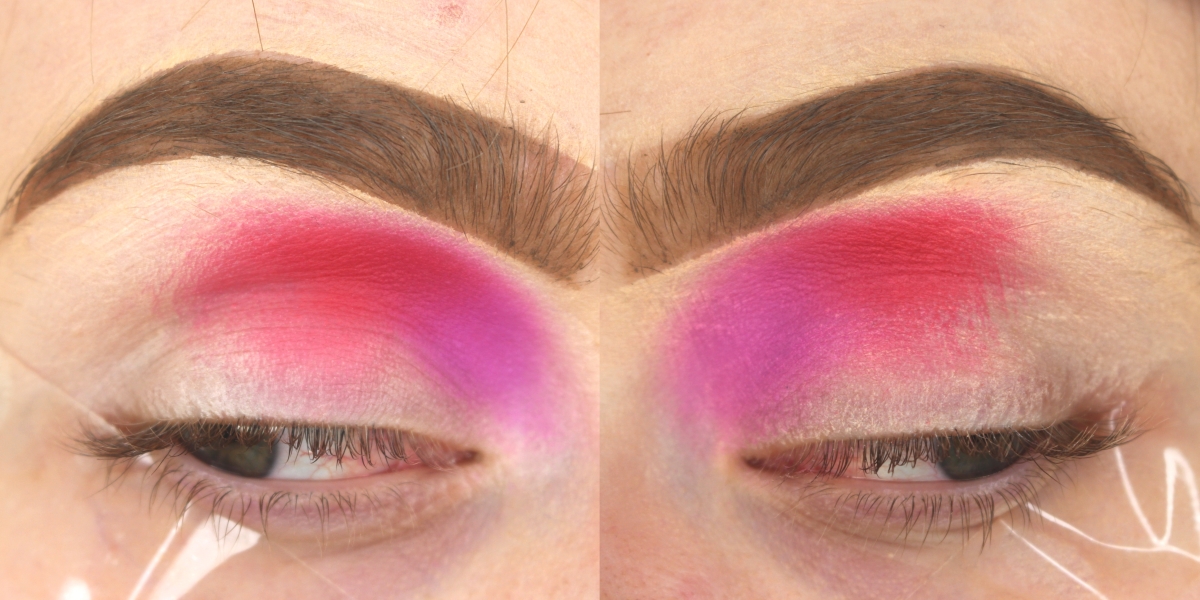 Next I went for red, with similar results to the pink. It’s almost like the PLouise base fills in any ridges in the skin to give a smooth canvas, while the Primer Potion side screams texture. 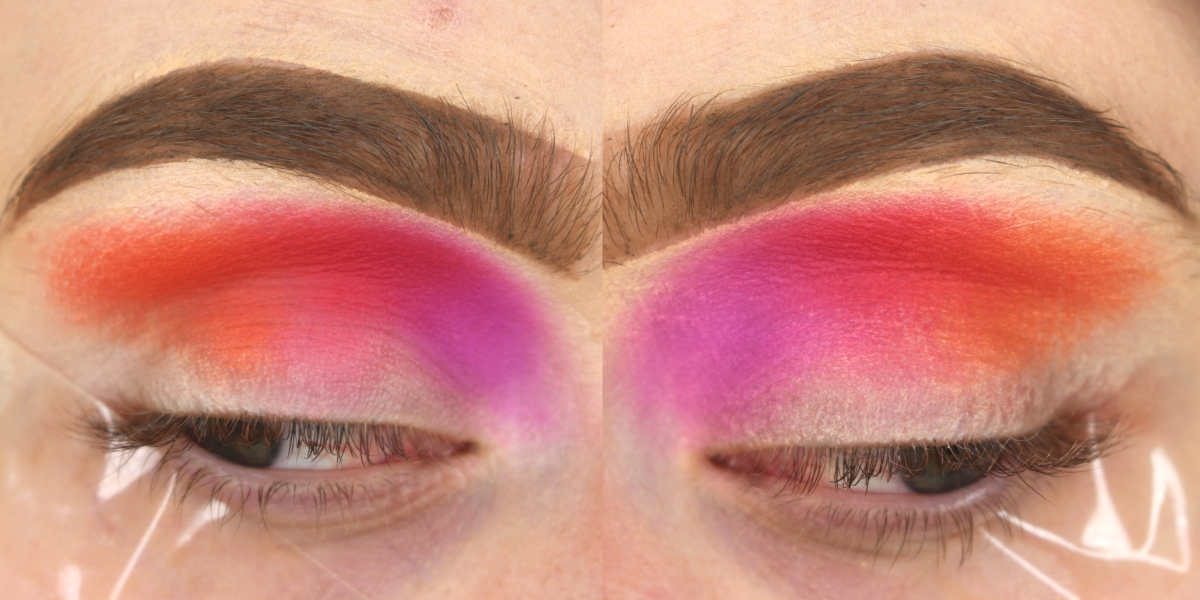 I finished this part off with orange and yellow, which took a lot of building up on the Primer Potion side, almost like it had already dried before I could get my look done. The main difference continues to be the texture: the PLouise Base just makes everything look so smooth!

One reason the PLouise base is so handy is that you can reuse it for cut creases and halo eyes, because it’s so opaque. As you can see, I attempted that with both primers and while I did successfully cut the crease, the picture on the right is just a bit of a mess.

The last colour on the lid is a shimmery pink. The yellow and orange are peeking through on both sides, but there is so much texture under the Primer Potion that eyelid looks older. Seriously, it’s Dermacol all over again…

I did the rest of my face, then added both bases with my fingers under my lashline to finish the eyeshadow. Apparently that was a bad idea, as Primer Potion actually rubbed off some of my concealer.

I added a blue and purple on the lower lashline, and followed it up with the L’Oréal Infallible Gel Crayon in I’ve Got the Blue. I also blended out the area under the brow bone with a nude, matte shade, and highlighted using the Revolution x Sophdoesnails palette, which I then used on the inner corner too. I then finished it off with some gel eyeliner, a little Collection Glam Crystals in Funk in the crease, mascara, and the Morphe Melrose Ave lashes.

I asked my boyfriend if he could see a difference between the two sides, and he told me that the PLouise side looked like it was more blended out, and I have to agree: it almost looks photoshopped in comparison! The pink on the inner corner of the Primer Potion side definitely has some skipping and well, to sum it up in one word: texture.

There is definitely a reason this base is all over the internet right now! It’s like a real life filter for your eye makeup: it gives a beautiful smooth finish with intensified colours. The shipping issues I had are my only concern with recommending this, although as they are no longer at the pre-order stage this may have improved. I think this is excellent value for money, and a must if you want to take your eye looks to the next level!

You can purchase the base from PLouise Academy. The full list of products used for this look will be available on my Instagram.

What are your thoughts on the PLouise products? Leave me a comment to let me know.

Let me know what you think! Cancel reply